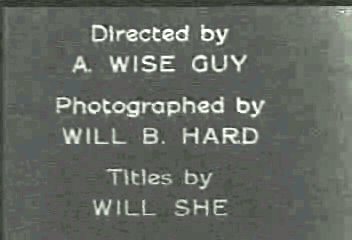 The very first pornographic film on record is reported to be from 1915. Somehow, it seems unbelievable that it took twenty years for humans to succumb to our most base urges and film a couple people in the act. It is less unbelievable that the basic structure for pornographic films doesn’t seem to have changed much in the last 100 years. A Free Ride, also known as A Grass Sandwich, begins with a stale plot-line that gives way to unlikely sexual behavior in what seems like an unpleasant location. Two hitchhiking ladies are picked up by a frisky truck driver. After a few nips of liquor and a quick game of peeping tom during a pit stop, all three parties get their kicks  in a road-side ménage à trois. When everyone i happy, they continue on their merry way. The end.

Although there is speculation, the origins of the film remain unknown. Some sources believe that the actors in the film were derelicts or drug addicts, recruited to participate for a small fee. Some believe that the film was actually made as late as 1923. And some have even ventured to guess that the great D. W. Griffith made this film. But none of these theories have been or can be corroborated at this point. Like James Deen and Stormy Daniels, it seems the early porn industry workers relied on pseudonyms to keep their personal lives clean. In this case, the filmmakers opted to shroud their identities in wordplay:

Despite ye olde tyme charme, watching A Free Ride 100 years later is strange and uncomfortable (as is most often the case with porn). A man and a woman humping on the grass on the side of the road, revealing 100 year old genitalia to the audience, it’s pretty icky. And the styles of the time only make matter worse. One of the ladies wears an ill-fitting wig of banana curls and the driver’s thick fake mustache and floppy hat immediately makes him seem, in today’s standards, to be a huge creep.  But hey, the actors were probably made up this way to hide their true identities (shoddy disguises if you ask me), and they certainly seem to wet each other’s whistles. If you want to experience the awkward romp for yourself, feel free. It’s public domain – nobody is claiming to rights to this cinematic masterpiece.