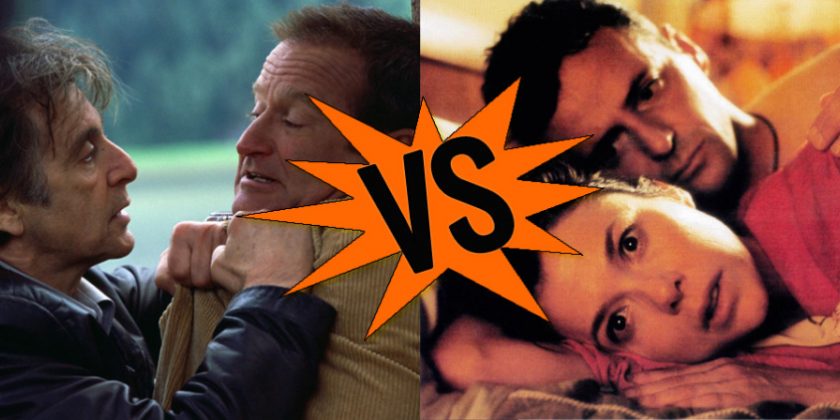 Showdown: Insomnia vs. In Dreams

Insomnia is a mystery movie with a twist: a seasoned cop (Al Pacino) confronts his own questionable moral decisions as he investigates the murder of a teenage girl in a small Alaskan town during the summertime when the sun never sets.

In Dreams is a mystery movie with a twist: a woman (Annette Bening) suffers visions that foretell the murder of her own daughter, and she must use clues from her dreams to track down the killer.

Sleep figures in to both of these films: In Insomnia, Pacino gets increasingly erratic as the constant sunlight (and his troubled conscience) keep him awake for days at a time. In In Dreams Bening gathers clues about the murderer via dreams (although she sometimes doesn’t seem to be sleeping; they are often waking dreams, or visions, or something else…but don’t try to figure it out, you won’t find an answer).

Insomnia (Christopher Nolan’s 2002 remake of the 1997 Swedish film of the same name) brings Detective Will Dormer (Pacino) and his partner Hap Eckhart (Martin Donovan) from Los Angeles to a northern Alaskan town where presumably nobody will notice how made-up both of their names sound. They’re there to investigate the killing of a teenage girl, whose body was cleaned in a creepily methodical way before being dumped. The local sheriff, an old friend of Dormer’s, thinks the seasoned team from L.A. will be able to help out their small-town force since Dormer is something of a celebrity among cops for his skill at tracking down serial killer types.

This was Nolan’s jump to Hollywood after hitting it big with the indie masterpiece Memento, and he does an admirable job of keeping the tone largely restrained and character-driven despite a significant budget increase over his previous work. Cinematography from Nolan regular Wally Pfister is simultaneously bleak and beautiful, and Pacino is more than comfortable in basically the most Pacinoesque role possible (aging cop with a troubled past who is starting to lose his grip).

In Dreams, directed by Neil Jordan (The Crying Game, Interview With the Vampire) has a remarkably dense background story involving an entire town that was intentionally flooded. Although an intriguing setup, it eventually disappoints. Claire Cooper (Bening) starts seeing visions in her dreams of a missing girl; this is clearly nothing new, as her husband (Adrian Quinn) rolls his eyes when she starts telling him about them. Turns out the visions are of their own daughter, who is soon kidnapped, murdered, and dumped into the lake. From then on, Claire’s visions increase, including one of her husband being killed by the family dog (yes, that happens), and eventually lead her to a man named Vivian Thompson (Robert Downey, Jr). It turns out they both spent time in the same mental hospital 20 years prior when a nurse and a police officer were murdered. But everyone in town seems to have forgotten about. She tracks him down to a long-forgotten apple processing facility of some sort, which miraculously contains boxes and silos of perfectly fresh apples ready to be used as odd props throughout the climactic moments. Eventually, Claire rescues another girl and Vivian is sent back to the mental hospital to live out his days having nightmarish visions and screaming through the tiny window before the film cuts to black.

In Insomnia Dormer and Eckhart come to Alaska after being investigated for an ethics violation by Internal Affairs. Eckhart wants to come clean; Dormer doesn’t. Seems like a straightforward enough clash until during their Alaskan investigation when they give chase to the suspect on a foggy beach. Dormer thinks he sees the perp and shoots, but it turns out to be his partner, who dies. Did he do it on purpose? Sure doesn’t seem like it, but he decides to hide the evidence anyway. Trouble is that the killer (Robin Williams) saw what happened and he wants to use the truth to hold Dormer hostage and get away with his crime. It’s a complex set-up that leads to a confrontation on a ferry boat that apparently just goes in circles. Williams is renowned local author Walter Finch, who for some reason nobody in the small town realizes lives there despite the fact that he has even done book signings there. He and the deceased girl had struck up a friendship until she spurned his sexual advances, at which point he strangled her. The confrontation between Dorner and Finch is trying to feel like Pacino vs De Niro in Heat, but the drama isn’t there: we don’t really know who Finch is, and his musings on the fragility of life feel overly scripted.

Finch largely seems to exist in order to lob philosophical questions at Dormer; he insists they team up to pin the crime on the girl’s ex-boyfriend, that as a writer he knows the small-town cops will eat that storyline up. He might as well be talking about the audience for the movie; the excessive exposition lays everything out for us way too obviously. This is a trait Nolan continued in many of his subsequent films (The Prestige, Inception, Interstellar): he delights in complex stories but doesn’t seem to think his viewers are as smart as he is so he needs to have his characters explain everything. Anyway, of course Dormer has his crucial turning point and rushes to the rescue of Detective Ellie Burr (Hilary Swank), who has figured everything out but is on the verge of being Finch’s next victim anyway. There’s some metaphorical material here: Dormer is initially lured by Evil, but finds redemption by rescuing Good.

The complex back story of In Dreams slips into an overly simplified climax with Downey’s Vivian – a pretty terrible acting performance as a sort of grown-up kid who was damaged by his mother – chasing Bening’s Claire around in the apple warehouse. He dresses her up in a red dress just like his mother wore and tells her she was a bad mom. There’s a weird psychic link between the two of them that forms the entire basis of the film, but goes completely unexplored. Vivian, it turns out, was abandoned by his mom in the town before it was flooded; he escaped but went crazy. And that’s basically it. Claire is able to find redemption by rescuing the next girl Vivian has kidnapped, making up in some respects for the loss of her own daughter.

These sorts of movies tend to like to give the killer an opportunity to explain the psychological underpinnings behind their crimes. They’re given lines which are meant to provoke the main character into questioning their own reality, but often what they say sounds thoughtful while being basically devoid of substance.

Walter Finch: “I didn’t murder her; I killed her, but it just ended up that way.”

What do these words actually mean? They’re self-contradictory and ambiguous phrases, designed to make you think you’ve just been smacked with some deep thoughts. But there’s an emptiness to both films – not the kind that keeps you coming back to ask questions and wonder, but the kind that just makes you feel like something is missing and you’ll never find it.

The critics were dozing a little bit. Insomnia is a solid, but flawed film with a few plot holes and too much exposition. It’s good but not great. In Dreams is more disappointing than anything: there’s interesting material there that is overlooked and lost to a a silly ending with a silly villain. It’s not very good, but if it’s on cable and you’re bored, you could do a lot worse.