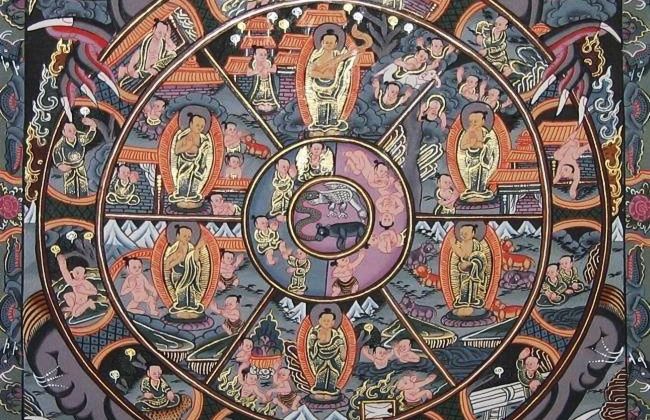 Enter The Void: Handbook for the Recently Deceased

The Bardo Thotrol, or Liberation Through Hearing During the Intermediate State – to the layman, The Tibetan Book of the Dead – offers Buddhist advice, instruction, and a plan to those who have died and are trying to navigate the 49 days between the moment of death and their rebirth as a new vessel. You could say it’s a handbook for the recently deceased (paging Beetlejuice, Beetlejuice, Beetlejuice).

The basic thing that you need to know when you die, apparently, is that your awareness, freed from corporeal bonds, creates it’s own dreamlike reality. By turns beautiful and dangerous, this world can quickly turn in on itself and trap the passenger in cyclic suffering. It’s heavy shit, but if you have the Bardo Thotrol handy, you should be able to make it through to enlightenment and rebirth.

The teachings of the Bardo Thotrol were orally passed down for centuries before being written down in the 8th Century AD. Since then, there have been countless translations, and the teachings have been adopted and morphed into all kinds of new and exciting forms. Jung got pretty deep with it, John Lennon wrote “Tomorrow Never Knows” about it, and the text is the basis for the film at hand this week, Gaspar Noé’s Enter The Void. Check out the seminal Evans-Wentz 1957 translation here, we hope you can tap into some of the Clear Light of Pure Reality.